The Bookkeeper For Keeps Washington Z. SyCip, co-founder of the most successful professional services firm in the country, SGV & Co., and a greatly admired business icon, passed away at the age of 96 on the night of October 7.
Former Finance Secretary Carlos F. Dominguez, a mentee of Mr. SyCip, was one of the first to break the news of his mentor’s death, in a Twitter post the following morning.

“Wash SyCip passed away last night en route to New York. Wash was 96 years old and lived a very full and meaningful life,” he said, using Mr. SyCip’s nickname. “I will miss you.”

Mr. SyCip was born in 1921 to Albino SyCip, a co-founder of China Bank, and Helen Bau, and had four siblings. He was an indubitably precocious fellow. He was accelerated three times while at Padre Burgos Elementary School and earned a bachelor’s degree from University Santo Tomas in just two and a half years. At the age of 18, Mr. SyCip was already a certified public accountant. After teaching at his alma mater while finishing his master’s degree, he flew to the United States (U.S.) to pursue a doctorate at Columbia University.

His academic pursuit was followed by a brief stint as a cryptographer in India for the U.S. during the Second World War.

The postwar period saw Mr. SyCip starting and helping grow what would become the largest and most prestigious professional services firm in the country – SyCip, Gorres, Velayo & Co. It was the product of the merger between SyCip, Velayo, Jose & Co., which Mr. SyCip formed together with Alfredo M. Velayo, a childhood friend, and Vicente O. Jose; and Henry Hunter Bayne & Co., whose accountants included Ramon J. Gorres.

The firm observed meritocracy, in accordance with Mr. SyCip’s desire. In a 2010 interview with BusinessWorld, he said, “My father would always tell us not to work in the bank. He would say, ‘If you do well and I promote you, they’re going to say it’s nepotism, and it’s embarrassing. If you don’t do well, it’s also embarrassing.’” He even said, in a 2013 interview, “When I started SGV, I said, ‘Even when I get married, my children will not come into the firm.’” 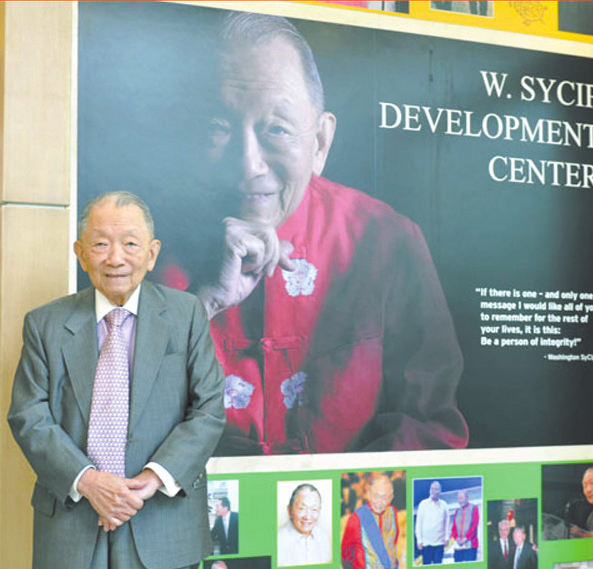 SGV continued its rapid expansion decades after its inception, setting up branches in cities outside Metro Manila and reaching neighboring countries. “I never expected [the company] to grow so fast,” Mr. SyCip said. SGV found a home on Ayala Avenue, two buildings simply named SGV I and SGV II.

In 1996, which marked its 50th anniversary, the firm’s assurance service line was awarded the International Standards Organization (ISO) 9001:2000 certification, which it has upheld since then. It was also during this year that Mr. SyCip decided to retire. But he did not isolate himself from the firm; up until his death, he maintained an office on the 14th floor of one of the firm’s buildings.

Even in his retirement, Mr. SyCip continued to be an active member of the business community, holding memberships in a number of corporate boards and committees. His counsel was prized.

Aside from being a sage businessman, Mr. SyCip was a prominent advocate of education reform. Among his key achievements was the establishment of the Asian Institute of Management (AIM), which is now a world-renowned business school.

In a statement released after the news of Mr. SyCip’s death became public, AIM said, “A staunch believer in education and its critical role in uplifting lives and eradicating poverty, Mr. SyCip was one of the key proponents behind AIM’s full-time MBA program that was attuned to a developing Asian region. His passion for excellence and commitment to mold business leaders, combined with his unfaltering generosity, led to the foundation of the Washington SyCip Graduate School of Business at AIM, which will celebrate its 50th year in 2018.”

AIM added, “His passing is a great loss to the institution and the country ’s business community, but his legacy will live on in the AIM alumni who strive to be ethical and responsible business leaders, and live up to Mr. SyCip’s call to lead, inspire and transform.”

Mr. SyCip was also a generous donor to the schools that educated him. P. Burgos Elementary School; University of Santo Tomas (UST); Victorino Mapa High School, where he graduated as valedictorian; and University of the Philippines, where he spent a semester as an undergraduate before transferring to UST, have received funding from him.

“I always believed that whatever the nationality of the person, if they had the same [quality] education, they could compete,” he said. “I am very confident of the ability of the Filipino to compete.”

The news of Mr. SyCip’s demise prompted an outpouring of grief and gratitude. Jose “Butch” Dalisay, Jr., who wrote the biography of Mr. SyCip, titled “Wash: Only a Bookkeeper,” wrote on his Twitter account, “Sorrowful to hear that Wash SyCip passed away at 96, still on the job.” Accompanying the post was a photo showing a letter Mr. SyCip had sent him, and his gift, a pen with an engraved image of an owl.

J. Carlitos G. Cruz, SGV chairman and managing partner, speaking on behalf of SGV, expressed sorrow for the passing of the firm’s founder in a Facebook post. “His vision from the very start was to develop Filipino professionals to be globally competitive as the Firm’s contribution to nation building. In his 96 years, he espoused and lived the values of integrity, excellence, hard work, and meritocracy. Mr. SyCip was an exemplary mentor and steward,” he said.

“His legacy will endure in all whose lives he has touched.” — Francis Anthony T. Valentin 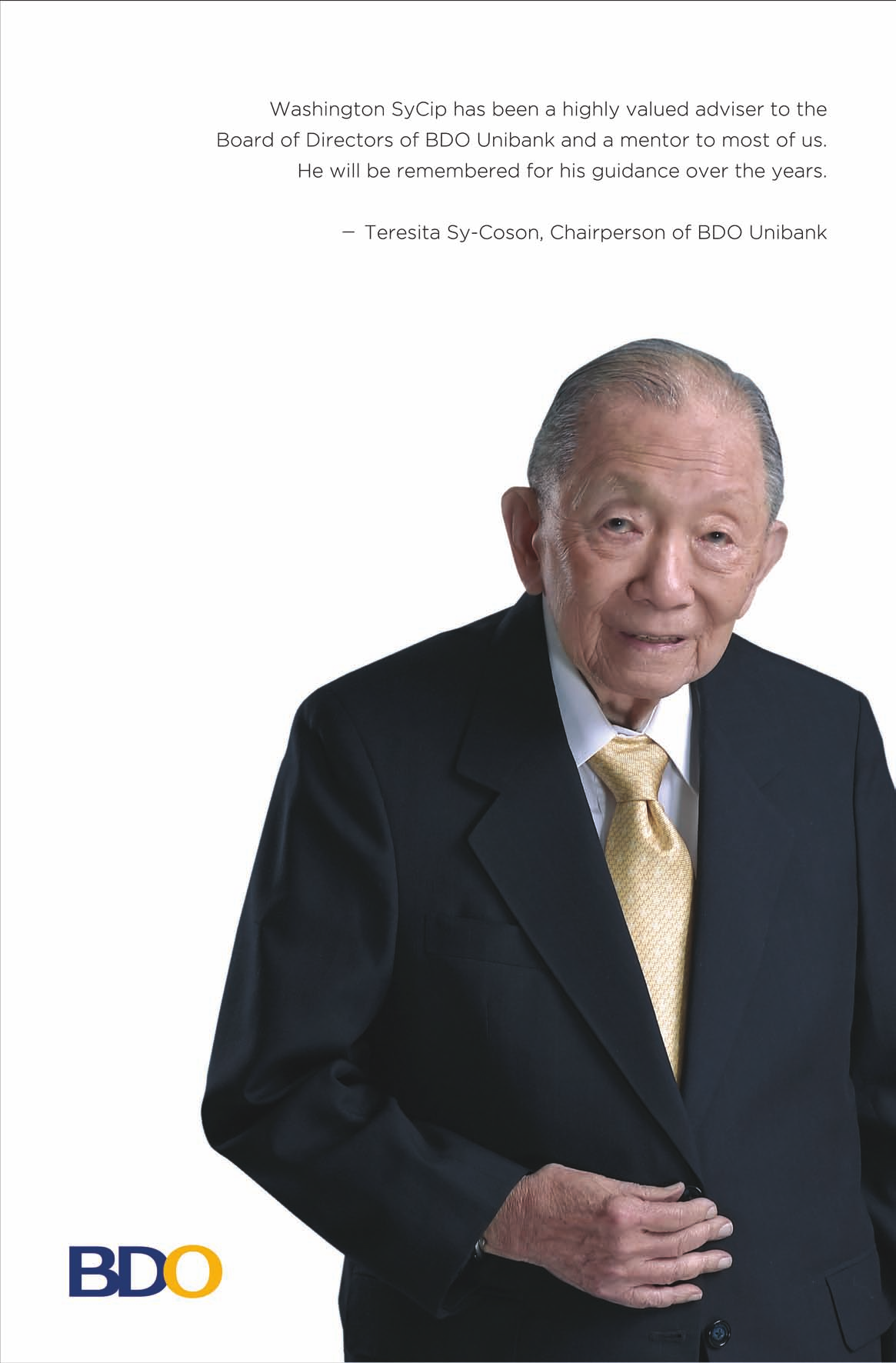