The country’s business community is mourning the loss of one of its most stalwart titans, Washington Z. SyCip, the co-founder of the country’s biggest accounting firm and renowned philanthropist.

For more than half a century, Mr. SyCip of SyCip, Gorres, Velayo & Co. (SGV & Co.), has been one of the pillars of Philippine business, and his contributions to the local community is such that the country will no doubt feel the void that he will leave behind. Perhaps even more so will his passing be felt in the country’s continued pursuit for quality education.

Ever the champion of education, Mr. SyCip believed that education is a powerful, transformative force that can lift millions of Filipinos out of poverty and destitution.

In a column published in BusinessWorld, Mr. SyCip wrote, “Education, I believe, is a basic necessity for the development of all human beings… Specifically, I have always believed that education should be available to all because it is the greatest equalizer in society. Not only do educated individuals improve their lives but they also contribute to national development.

And over the course of his long life, he has strived to live up to his beliefs. He has contributed much to the education of Filipinos everywhere, young leaders and managers especially through the Asian Institute of Management (AIM), which he cofounded in 1968.

His legacy is such that on his passing the AIM issued this statement: “A staunch believer in education and its critical role in uplifting lives and eradicating poverty, Mr. SyCip was one of the key proponents behind AIM’s full-time MBA program that was attuned to a developing Asian region. His passion for excellence and commitment to mold business leaders, combined with his unfaltering generosity, led to the foundation of the Washington SyCip Graduate School of Business at AIM, which will celebrate its 50th year in 2018.”

"Mr. SyCip was deeply involved in AIM’s on-going transformation to revitalize its role in an emerging ASEAN , and strongly supported its efforts to rebrand and expand program offerings for the next wave of business leaders,” AIM added.

“His passing is a great loss to the institution and the country’s business community, but his legacy will live on in the AIM alumni who strive to be ethical and responsible business leaders, and live up to Mr. SyCip’s call to LEAD, INSPIRE and TRANSFORM.”

As someone who was proudly a product of the Philippine public school system, Mr. SyCip yearned to bring back the golden standard of public education to the masses. To this end, he served on the Board of Trustees of the Synergeia Foundation, a non-profit organization working to improve the quality of basic education in the Philippines.

“The Philippine public educational system has been neglected for many years, and this is shameful. I will not go through the factors that have caused this decline but suffice it to say that Government would have to constantly revisit the national budget for education. Compa red to our neighbors, the Philippines is spending the least on education, especially in the elementary and secondary levels. Basic education is inadequate while college education is misaligned with the country ’s manpower needs,” Mr. SyCip wrote. 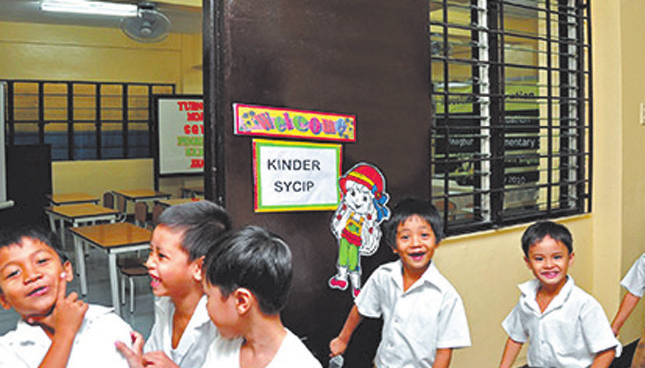 John Silva, trustee of Synergeia Foundation, recounted how the tycoon had been instrumental in the development of the organization, and how Mr. SyCip delighted in sharing his vision for improved public schooling.

“In the many forums where he spoke he would be asked why he concentrated on education as his philanthropy. His eyes would light up, thankful for the opportunity to tell a story I heard many times from him. He was, he related, a product of the public school system in Manila and he remembered the very high standards exacted on students. The American public school system which was planted in our country at the turn of the century was rigorous and molded students to excel in all areas. A secular education was intent on making students smarter and imbued with democratic ideals rather than the cloistered, feudal, and devotee students emphasized by the Catholic schools,” Mr. Silva said in a Facebook tribute to Mr. SyCip.

“Mr. SyCip was quite proud of his public schooling and Synergeia, trying to overhaul and upgrade the country ’s broken school system was the likely choice to part with his largesse and return the gratitude to the schools that made him.”

To the poor Filipinos who could not afford even to send their children to get a basic education, Mr. SyCip also extended a helping hand. Through the Zero Dropout Education Scheme (Zero Dropout), which he fully initiated and funded with the Center for Agriculture and Rural Development, Inc. in 2011, he has helped send the children of the country’s poorest to school and minimize dropout rates through providing loans to their parents. As of August 2017, the Zero Dropout Program had reached out to over 450,000 children that would otherwise not be in elementary school.

Truly, it could not be clearer that Mr. SyCip held his advocacy for education close to his heart. In his passion to bring about ‘the great equalizer’, the immortal gift of knowledge, he has touched the lives of countless students and given them a new lease on a life that otherwise would have been bound to poverty and hardship.

Mr. Silva recalled something that Mr. SyCip had once said to him. “I want the students not just to be literate and can read instructional manuals. I want them to read and be inspired by a poem, to read and enjoy a museum. I want them to love a ballet and be moved by an orchestra. All the wonders you and I take for granted.”

Perhaps through this, his legacy will live on. — Bjorn Biel M. Beltran